A Reflection on Japan’s “Quantitative Freezing”

As Contrarian Capitalist discussed two years ago in summer 2012, Yen has depreciated against dollar from a low of 76 Yen/Dollar to 105 Yen/Dollar, a 38% movement during the last two years. However, another part of our prediction has yet come to reality. The yields on JGBs have only gone lower during the same time period; a fully powered central bank such as Bank of Japan can easily delay the burst of a bubble for years. The further it delays, the bigger and more severe the bubble may become. Since April 2013, Bank of Japan has re-initiated another round of quantitative easing program under the Abenomics.

“Quantitative Freezing” a term that was coined by The Economist’s recent issue, figuratively depicted the current distorted market condition of the 10-year Japanese government bond market. 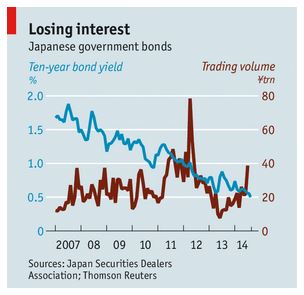 We dug into the source of the data and compiled a chart with total JGB trading volume and longer time frame, in order to show a better perspective on the topic. As The Economist further put, Bank of Japan currently buys (monetizes) 70% of total newly issued Japanese Government Bonds and owns 20% of total outstanding Japanese Government Bonds; we suspect that the recent spike (marked by red circle) on the volume is majorly due to purchases from the Bank of Japan. It is also important to note that the JGB purchase volume by foreigners has been increasingly exceeding the sale volume since the financial crisis, which represents a bigger interest in the JGBs from foreign investors.

Moreover, we have found that JGB futures and JGB futures options trading volume have dropped to close historical lows, marked by the red line in the following chart. Perhaps, Bank of Japan is not purchasing those two types of securities as part of the QE program, which could be proved from the table at the bottom of the post.

In addition, as the following quote from the recent article in The Economist indicates, large JGB bond trading desks at European banks have been laying off traders as the volume of JGBs continues to fall off.

“Yet a little market malfunction would be a small price to pay for lifting Japan out of deflation. In fact, argue some, the situation is of concern only to bond traders. They are making rather less money than before, says Peter Tasker of Arcus Investment, a fund-management firm. Trading desks could be pared down if volumes fail to rebound, says Ki Cho of PIMCO, a big bond-fund manager. Some European banks have already drastically shrunk their JGB departments.”

According to the definition set by Bank of International Settlements,  a liquid market is “a market where participants can rapidly execute large-volume transactions with a small impact on prices.” Based on a recent paper (November 2013) published by Bank of Japan itself, “Indicators Related to Liquidity in JGB Markets”, liquidity can be evaluated in a number of indicators, including turnover/turnover ratio measuring volume, the bid-ask spread measuring trading cost, the daily price range to turnover ratio measuring market resiliency, and information on the trading board measuring market depth.

It should be noted that the paper aforementioned above concluded that the introduction of the recent QE program in April 2013 had only had minor impacts on the JGB market and JGB futures market through November 2013. The paper supported its conclusions by focusing more on JGB futures market than the JGB market, but we don’t think the recent QE program should have any significant and long term liquidity impact on the future market as Bank of Japan does not directly intervene that particular market. However, we do want to present couple charts from the paper, which could be essential to monitor through the present day, even though they didn’t show red flags as of November 2013. 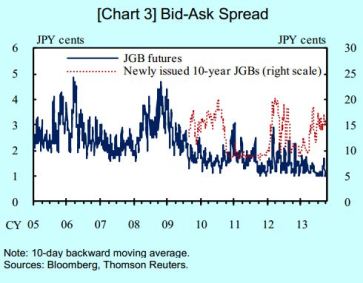 The following chart is the daily changes in the Daily Price Range to Turnover Ratio for newly issued 10-year JGBs that are decomposed into the daily price range factor and the turnover factor.

The full paper can be accessed here.

Nevertheless, the liquidity of the JGB market started to become a concern in 2014. In April of 2014, cash 10-year bonds were not traded for a day and half, the first time in 13 years. In fact, even the market participants of JGBs are really worried about the liquidity issue. Based on a recent Meeting of JGB Market Special Participants dated as of March 2014, the following excerpts from the minutes are quite illuminating. The liquidity of 15-year Floating Bond is practically provided “only” by the Bank of Japan. And we would agree with their view that there is a high probability that at this stage of cycle, any additional major intervention from Bank of Japan would likely to reverse a dropping yield situation, at least temporarily, as it did in 2013.

We are humble about our ignorance – it would be extremely difficult or even impossible to call the inflection point of this decade-long trend or the end point of the Quantitative Easing experiment.  However, this might be an early indication of a gradually reversing trend, as the imploding process gradually unfolds with increasing amount of quantitative easing from Central Bank of Japan and Abe’s determination to fight price deflation. And yes, Contrarian Capitalist continues to expect further depreciation of Yen against Dollar within the near term future (it actually did depreciate from 105 to 109 after this paragraph was written, we didn’t finish the whole post until today though), as the Fed continues to taper and initiate talks with potential rate hikes (for now) and an increasing probability that Bank of Japan will continue or expand its QE program.